Cultural Placemaking
HomeFeaturesCommunityFortifications for the soul

Dover’s Fort Burgoyne has been largely inaccessible to the public until The Land Trust brought together Dover Arts Development, (DAD), and Charles Holland Architects to launch “The Explorers” –  a series of themed walks and engagement exercises as part of Pioneering Places to help inform the development of future uses for the Fort and its West Wing Battery.

The Explorers invited the local community to take part in the walks as an altogether more engaging and enjoyable approach to public consultation, with members of the local community sharing their thoughts and ideas for what might be done with the site and to help open it out to the wider community in the future.

All participants carried an all-weather field notebook to record observations and make notes, do drawings and collect thoughts. This all helped feed into a ‘Big Drawing’ to capture these ideas, created by Charles Holland Architects, which will in turn be used to inform future developments at the Fort, including an artist’s brief for a new public art work at the West Wing Battery.

Each of the walks led to the West Wing Battery via a different route, seen through a particular set of eyes. They have mapped the West Wing and its relationship to Dover through the lens of military and architectural history as well as lived and day-today experience. Collectively they allowed us to place the West Wing within the historical and contemporary context of Dover and have generated ideas about its future use.

Herb and pleasure gardens; mazes and campsites; a climbing wall and remediated tunnel; art hut and zoo feature in the Big Drawing, as possible future uses of the 42 hectare site, including 25 hectares of local wildlife site grassland, 7 hectares of recreation ground and a 10 hectare scheduled ancient monument.

Led by Philip Hutton and Christopher Lumgair, An Architect’s Walk approached the Fort in the context of Dover Castle – England’s largest castle – and the local architecture. Starting on the green at Castle Hill House, the walk proceeded up to where Lauriston Place and Victoria Park meet and on to the corner of Connaught Road and Castle Hill Road.

It raised participants’ awareness of the lifestyles of those employed at the Garrison, and their demands for elegant housing and pleasure gardens. 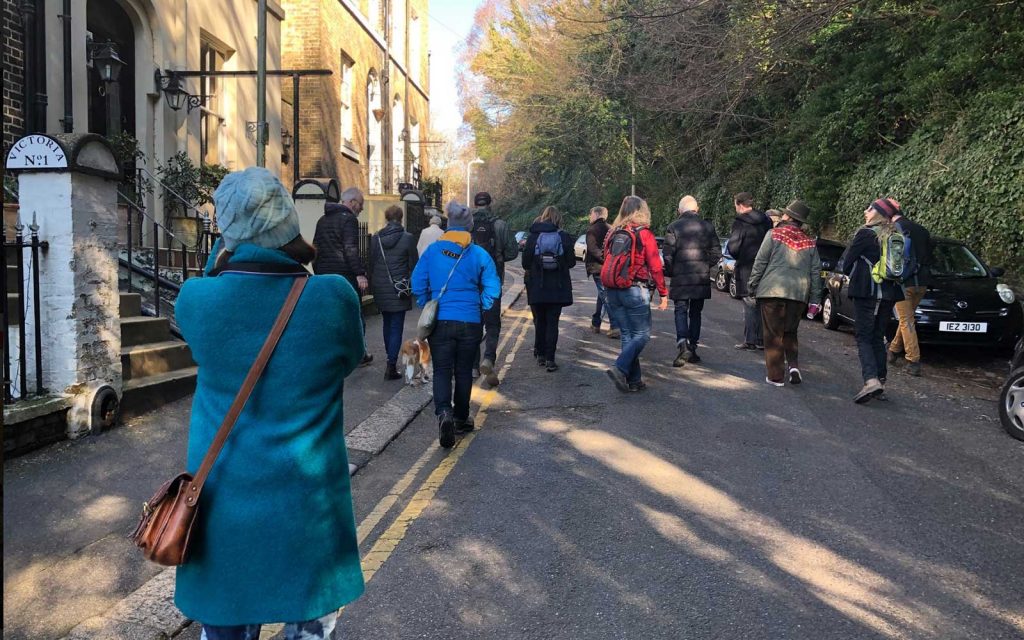 Originally called Castle Hill Fort, Fort Burgoyne is a redoubt – a place of retreat – half a mile north of Dover Castle. It was built between 1861 and 1873, on the recommendation of the Royal Commission on the Defence of the United Kingdom.

Local historian, Andy Rayner, explained how large numbers of volunteer soldiers flocked to Dover to defend the realm, with up to 20,000 people participating in festivals around Fort Burgoyne, which included mock battles enacted by members of the Rifle Volunteers and Yeomanry Cavalry as well as the Royal East Kent Mounted Rifles.

Starting at the Grand Shaft – designed to enable the rapid movement of troops from sea level to hill top – 13 Explorers joined the walk and marched across from the Western Heights, to Market Square, up Castle Street, on to Victoria Park and up to Fort Burgoyne.

In contrast, the 20 explorers who joined Simon Bill’s ‘An Artist’s Walk’ set off further north of the castle – from the main entrance to Connaught Park – where they rambled through the overgrown, ‘secret garden-esque’ defensive ditch around the West Wing Battery.

Described by Simon as “more like an exploratory ramble than an organised walk”, The Artist’s Walk took in the contrasting scenes of open parkland, clambered through ivy and ferns, WW2 brutalist concrete structures and the ruins of the Western Battery itself.

Both Philip Hutton and Andy Rayner joined Karuna Gurung, a member of the Ghurka community living adjacent to the Fort, as she led 14 explorers up from Market Square, along Laureston Place and Victoria Park to the kissing gates installed by the Land Trust, entering the West Wing Battery from the Connaught Park side entrance. The route is one that a visitor to Dover might take in the future who wanted to visit the re-imagined site of the West Wing Battery.

Capturing the voice of young Explorers

The Fort occupies the highest strategic point in Dover. “It was good to be up high and see it all,” said one young person who joined an additional session with Guston Primary School, with another adding “It was really exciting to be able to see all the area”.

These young people assisted the project by exploring, noting and drawing their ideas on possible future uses for the West Wing Battery in their own all-weather Explorer note books.

“Children did it with fantastic enthusiasm – completely engaged”, said architect Charles Holland. “They came up with certain kinds of ideas that maybe others wouldn’t have thought of and these were also represented in the Big Drawing without any hierarchy”.

Beyond the Big Drawing

All the ideas, from young people and adults alike, from all walks – and all walks of life – will become part of the visioning for the West Wing Battery as a space to be used by the existing community, as well as the new community that will arrive once the new houses adjacent to the site and on the former barracks land at Fort Burgoyne are built.

The immediate context for the West Wing will thus be a new one. The Explorers will help shape that new relationship.