Over the past six months children from four primary schools in Folkestone have been working on proposals for how the disused Gasworks on Ship Street could be used. Architectural Association’s, (AA), Little Architect director Dolores Victoria Ruiz-Garrido, better known to the children as ‘Lola’, worked with the Learning Officer at Creative Folkestone to deliver the project for Pioneering Places. She explains that Creative Folkestone put the AA Little Architect in touch with the four schools – Christ Church, Mundella, St Marys and Stella Maris Primary schools – and “worked together really nicely” to coordinate the project, which included 2-3 people travelling down from the AA in London for workshops with the children since November last year.

The AA Little Architect helps schools teach students about architecture and sustainability by engaging in projects, such as the proposals for the Gasworks. Lola reflects that – at the beginning of the project – she didn’t plan to include scale models in the workshops, as modelling to scale is “a bit abstract” for year 4 students, aged between 8-9 years old.

But she decided to include learning about scale and modelling for the fourth workshop, after seeing the response to the earlier sessions. The result is that people visiting the summer exhibition for the project, could put a ruler to the models, multiply by 100 and envisage the real-life scale of the models that children had created. 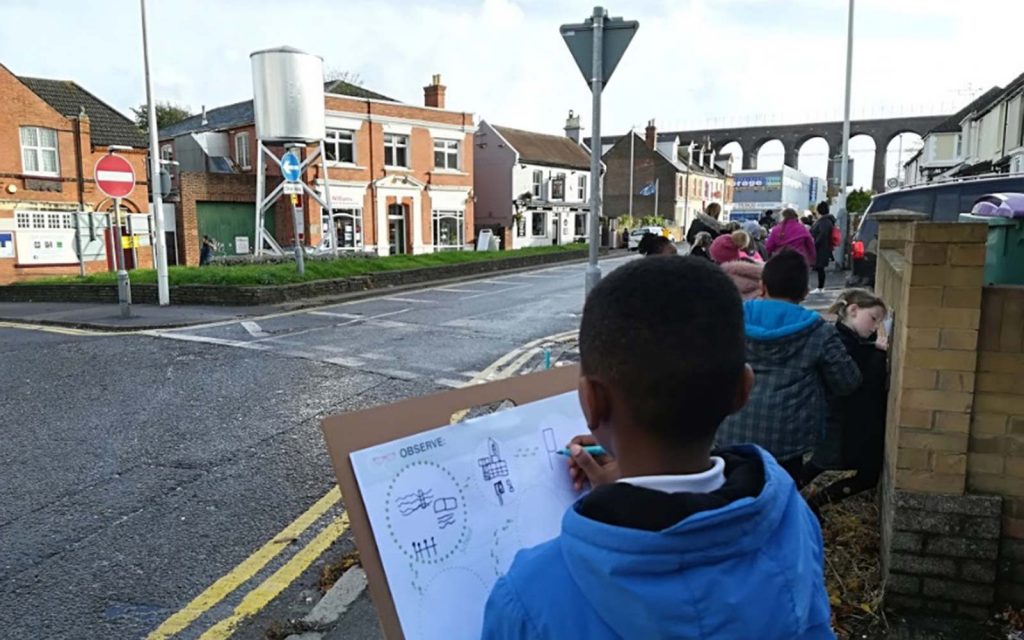 The first workshop involved fostering creative thinking, with the children drawing a house at the beginning and end of the workshop. The second was geared towards fostering observation and critical thinking: looking at the environment and appreciating it with all five senses. Over the Christmas period the children continued to be engaged by undertaking homework encouraging them to record the places they visited and the feelings different buildings inspired.

The third workshop brought together the learnings from the previous two, with children tasked with thinking about what they would design for the Gasworks site. Models of these ideas were then produced in the fourth workshop.

The book produced summarising the project observes that children want “more areas to play, space for bikes, pets and music centres”. But the project is about more than just the Gasworks.

“The legacy of this project is huge in that one school is going to change the way they teach,” says Lola, observing that one of the schools involved – Christ Church CEP Academy – is going to continue the methodology introduced.

This will involve more classes than just year 4 being involved in the school’s “own version of the Little Architect-Pioneering Places project,” as the school’s lower junior team leader Ian Goldsmith puts it. Students will consider the “social, emotional and environmental impact of their designs [for a building], as well as functionality” and make models of their buildings.

The exercise extends an art class beyond drawing, to incorporate other subjects – such as the mathematical skills required for modelling.

Lola observes that art is “disappearing from the curriculum” for years 4, 5 and 6 of primary school, while years 1, 2 and 3 have more time for art on the curriculum. “The national curriculum is cutting art everywhere,” she says, adding that she also teaches in Kiev, Ukraine where there are “no tools to teach creativity”. She adds that allowing more room for creativity is “even more needed” in secondary schools, although she acknowledges that her experience of UK secondary education is limited.

Projects such as the Gasworks proposals encourage children to engage in the community, and exposes them to different types of vocations, from architecture to planning, landscape, conservation, project management and sustainability.

Lola notes that many parents had approached her, saying that their children were now talking about becoming architects. She observes that there is less exposure to the work that architects are engaged in smaller cities and towns.

“You can always create a link related to context… to use architecture to engage more” with other subjects says Lola, referring to science, technology, engineering, art, maths or STEAM subjects.

Register now (free registration) for an opportunity to learn more about this innovative, child-focused placemaking project, plus a chance to see the Turner Prize exhibition at the Turner Contemporary, Margate.

How is a community's sense of place and placemaking reflected online? Where does place exist in the digital realm? As we emerge...
Read more
Culture

How is a community's sense of place and placemaking reflected online? Where does place exist in the digital realm? As we emerge...
Read more